ROMA CORPOREALITY AND THEIR NON-BINARY SPACES

WE* ARE AN ERROR

WE ARE A GLITCH IN THE SYSTEM FORCED UPON YOU; WE ARE A MISTAKE TO YOU

OUR IDENTITY IS AN UNSETTLING GAP IN YOUR CONSCIENCE

WE STRATEGICALLY USE OUR BODIES AS MATERIAL, THE MATERIAL AS AN INSTRUMENT, THE INSTRUMENT AS A WEAPON AGAINST YOUR HETERONORMATIVE LINEARITY.

WE HAVE STRATEGICALLY LEARNED TO USE OUR ERROR AS SELF-DEFENSE

UP UNTIL TODAY, YOU HAVE CREATED DECEPTIVE AND DIRTY OPINIONS OF US, THEREFORE YOU DON’T KNOW WHO WE ARE

TODAY, LOUDLY AND WITH SOVEREIGNTY, WE* ARE SPEAKING UP DEMONSTRATIVELY TO REFRAME THE IMAGE OF ROMA IDENTITY 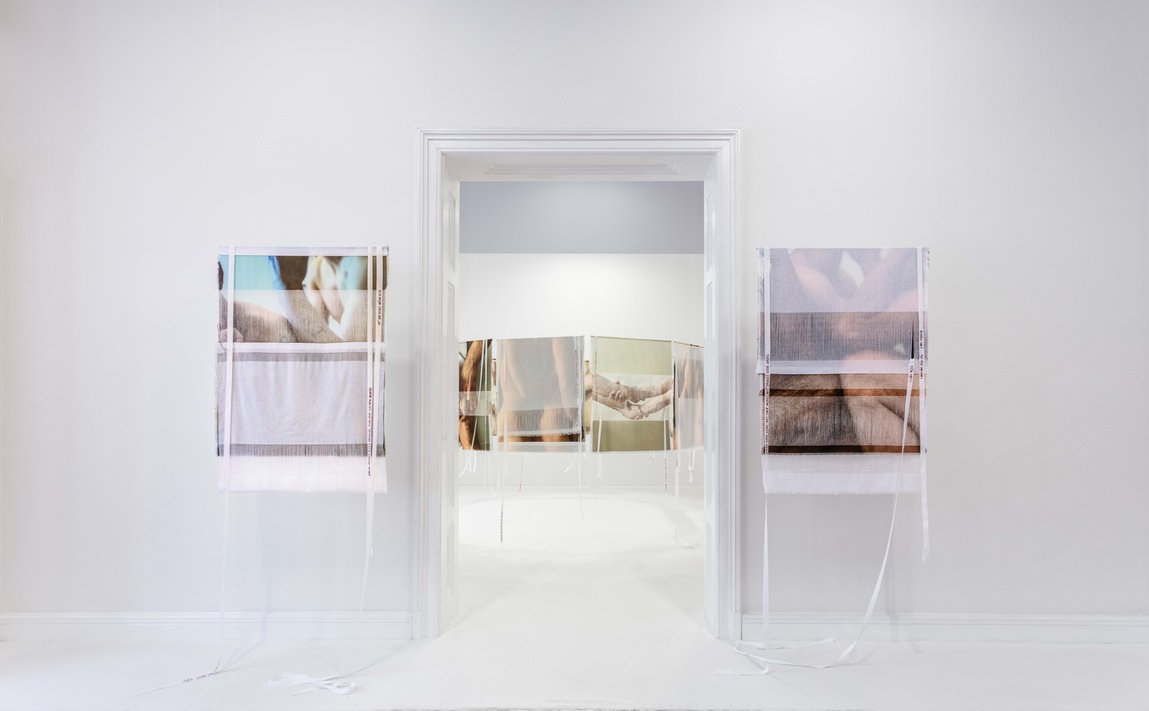 We are the soldiers of our ghetto!

I didn't invite you!

“I’m ashamed of myself, and that’s your fault,” says the young non-binary Roma participant, one of 27 unique beings connected by the communal project ERROR initiated by the artist Robert Gabris. During his residency in Košice in the spring, Gabris used dating apps to meet representatives of the Roma queer and non-binary minority – a “multi-marginalized” community whose members are outsiders vis-a-vis both the majority society and the Roma ghetto environment from which this particular group hails. LGBTQIA+ dating apps, which could offer a safe space to connect people who might otherwise have difficulty finding each other, only present yet another platform that enables exploitation, racism and sexual violence against them.

At the meetings between Robert Gabris and the representatives of this heterogeneous group, they shared their experiences, dreamed of alternatives, and attempted to formulate collective demands. A series of interviews and intimate photographs arose, connecting the subjects’ bodies, reflecting individual and collective traumas and feelings of guilt and shame, yet also carrying an emancipatory potential, a longing to move in a new direction.

The photographs, printed on cloth, partially unstitched, form the core of Gabris’s installation at the Moravian Gallery, along with texts excerpts from their conversations together. Through the fabrics and networks of threads, the space becomes physically inaccessible, yet transparent. It is an exclusive place into which exhibition visitors can only view from the outside, because, from their usually privileged position, they are unable to fully understand it. This arrangement is also a demand on art institutions, which are attempting to become more inclusive places than they have been traditionally, to assume an even more radical position – to offer a space within their inclusivity for something quite exclusive; to provide a territorial space they themselves cannot enter, only assist from outside with humility. The physical installation in the gallery is just one element in the whole project.

In addition to the meetings with representatives of the aforementioned community, Gabris is also forging further alliances, with health centers, allied political representatives, non-governmental organizations and a number of further groups and individuals who could contribute to at least a partial shift in addressing the many burning themes surrounding the existence of this group – whether it be about lack of access to and awareness of health care options, the ubiquitous poverty and prostitution as one of few options for generating income, or issues of self-awareness and support systems, security, improving the status of queer, trans and non-binary Roma within their own families and communities, etc. The intention of the project is to establish a long-term platform for finding new ways and further uniting this community, which has been rather disparate until now. The temporary space at this year’s Jindřich Chalupecký Award exhibition is the testimony to the dream of creating a real, physical space that would be a safe environment for meeting, mutual care and development. During the exhibition, it will also become an arena for internal discussion that could give a more concrete shape to the existing vision. 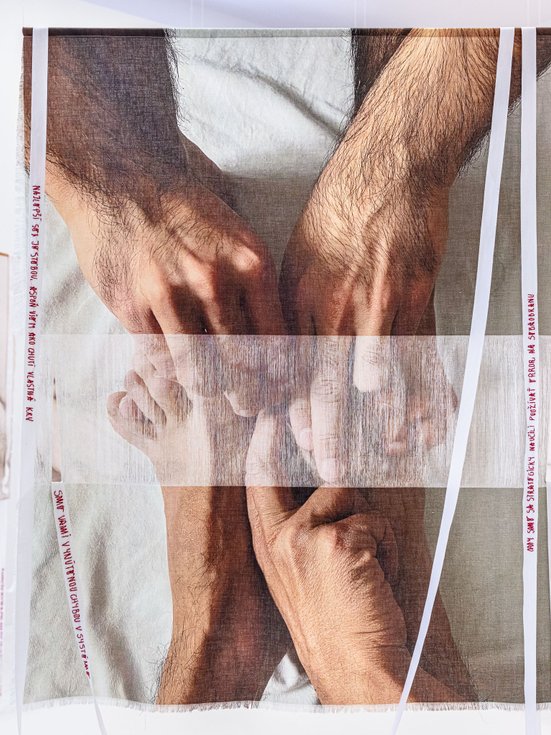 The best sex is with you, at least I know what my own blood tastes like.

We are a mistake in the system forced by you.

We* have strategically learned to use error for self-defense. 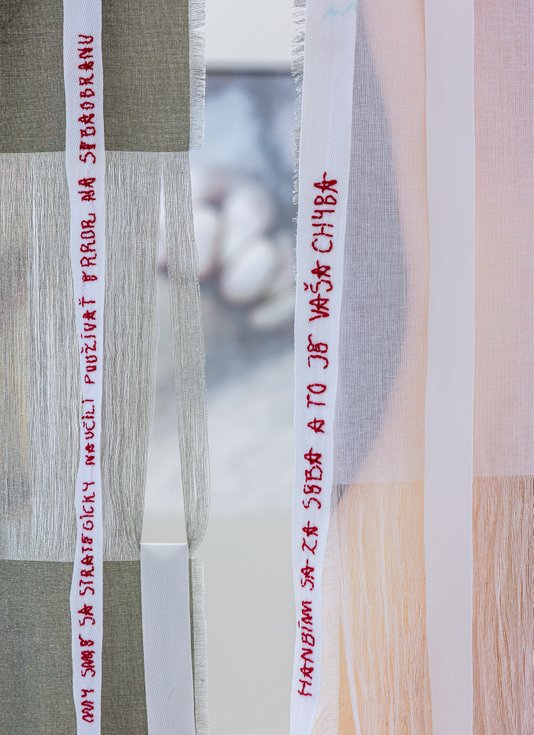 We are a mistake for you. 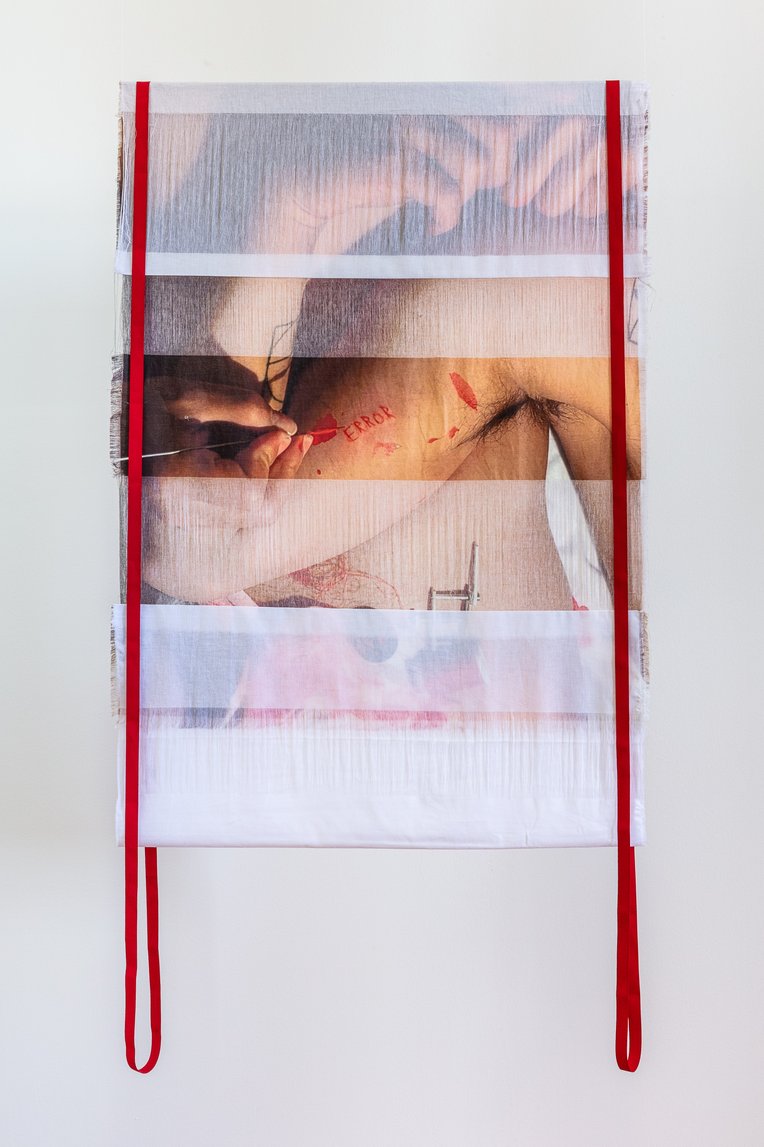 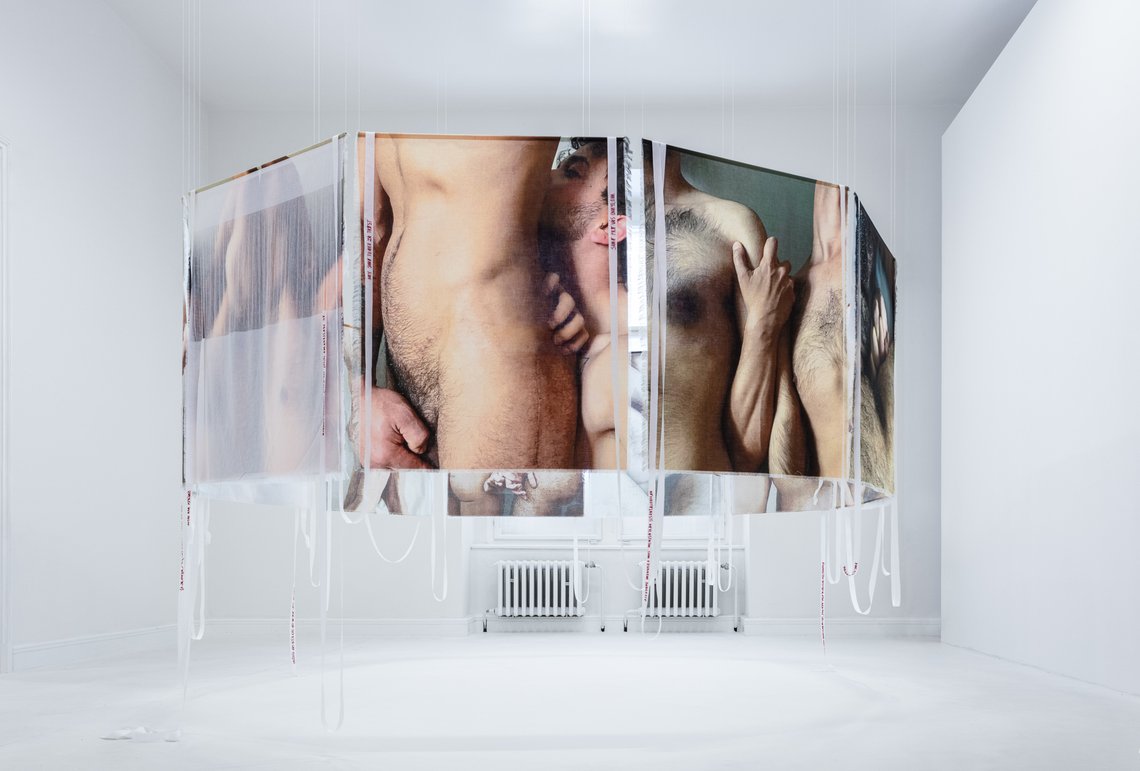 We agreed to build our own house at the end

Exoticizing the Romani body is a fetish of painful pleasure for you. 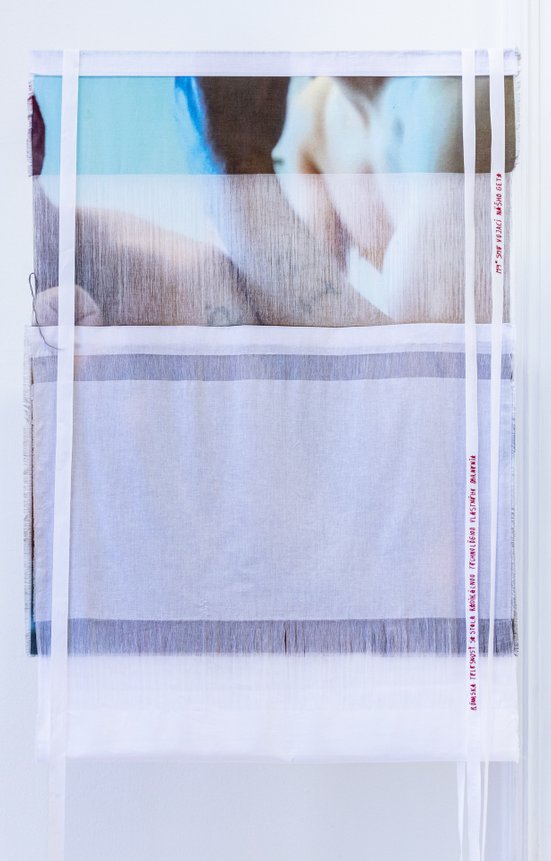 Roma corporeality has become a radical technology of self-armour 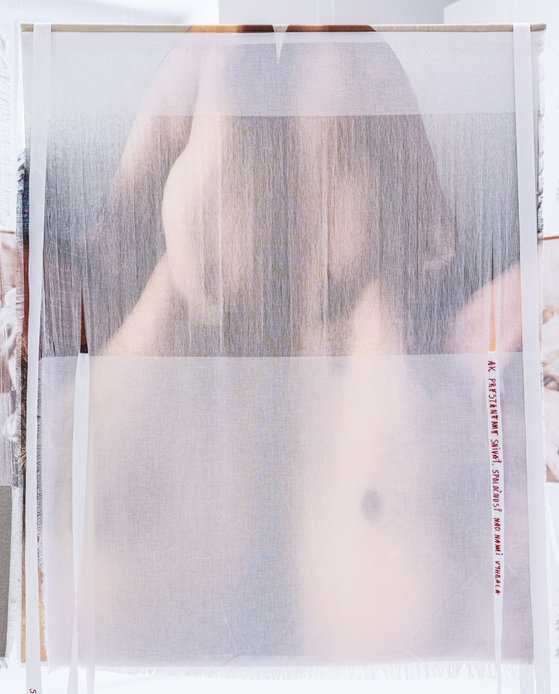 What's worse? Being Roma or being seen as Roma?

Laughter as a resistance. 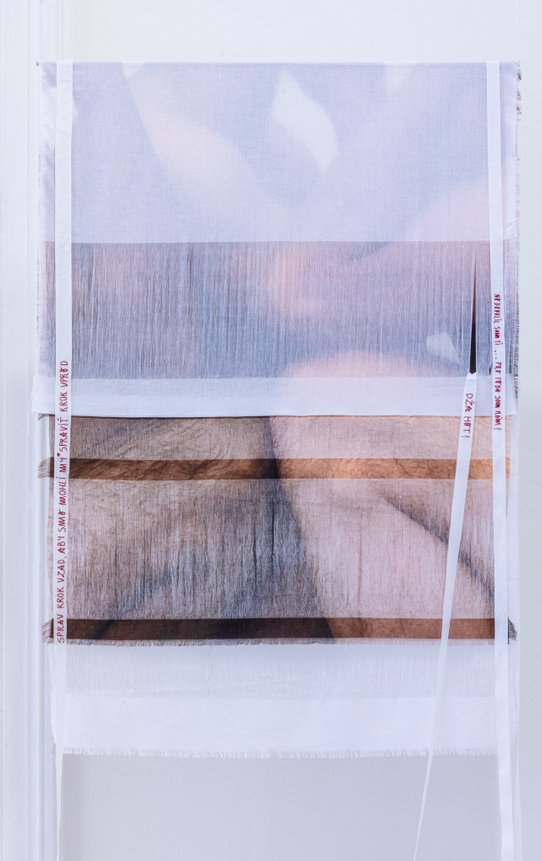 I'm ashamed of myself, and that's your fault. 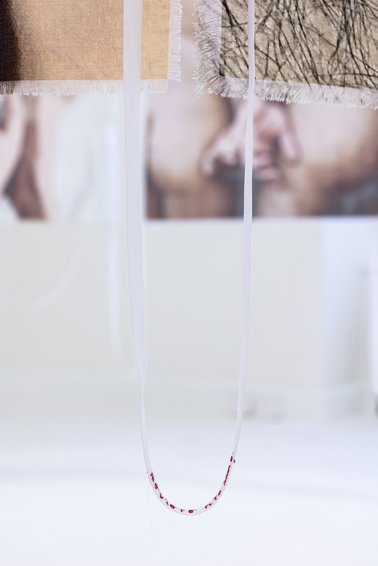 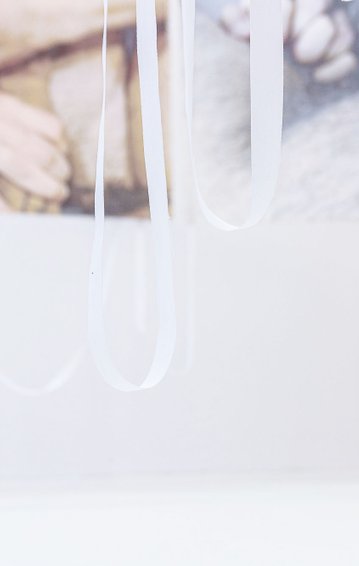 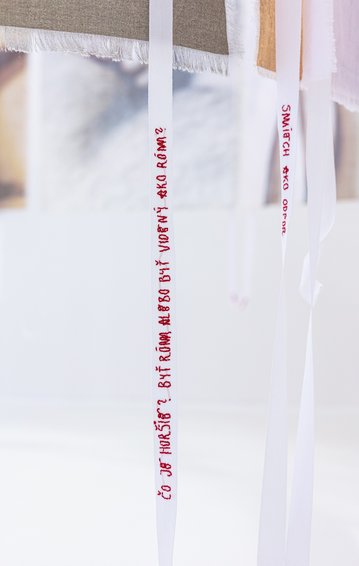 ERROR AS A CORRECTION FOR THE INVISIBLE BODIES

This statement serves my urgent need to correct and complete the finished ERROR installation. There is no circle because there is no community. It simply does not exist.

On 23.8.2021, I exhibited my new work ERROR at the Moravian Gallery in Brno. This installation consists of 14 fabrics, 11 fabrics hanging in a circle in the first room, three fabrics hanging in the second room. A cold light evenly illuminates all of the works, reminiscent of a laboratory or a dissecting room. Each piece features the imprints of the bodies of people I have met who negotiated a new definition of a "non-binary space of Roma corporeality."

A circle that does not invite but excludes

I've excluded the invisible ones and given them no room to get in.

The first room consists of a closed, protective circle of bodies.  I have only just now realized, so late, that I have closed off my installation from those who desperately need it - the invisible ones. My sovereign pride and vanity sealed the space, and only now do I realize what consequences such a move can have. It is harmful and unacceptable. I have an urgent need to correct it. This process is in constant motion, forcing lessons not only on others, but also myself, to be courageous and able to relearn. This thought troubles me and does not let me sleep, because I have made a mistake. Yet I have chosen a strategy that will help me correct it.

First and foremost, I need to open up the circle. I will replace a few of the photos with blank fabrics. They embody the ones that cannot / may not be present among us. These fabrics will be long enough to touch the floor. I want to put several white fabrics on top of each other in the middle of the space, symbolizing those who are not present among us, but should be. I will put the remaining fabrics in the next room, so that the three lonely pictures do not hang in such strict symmetry without context or connection to other bodies.